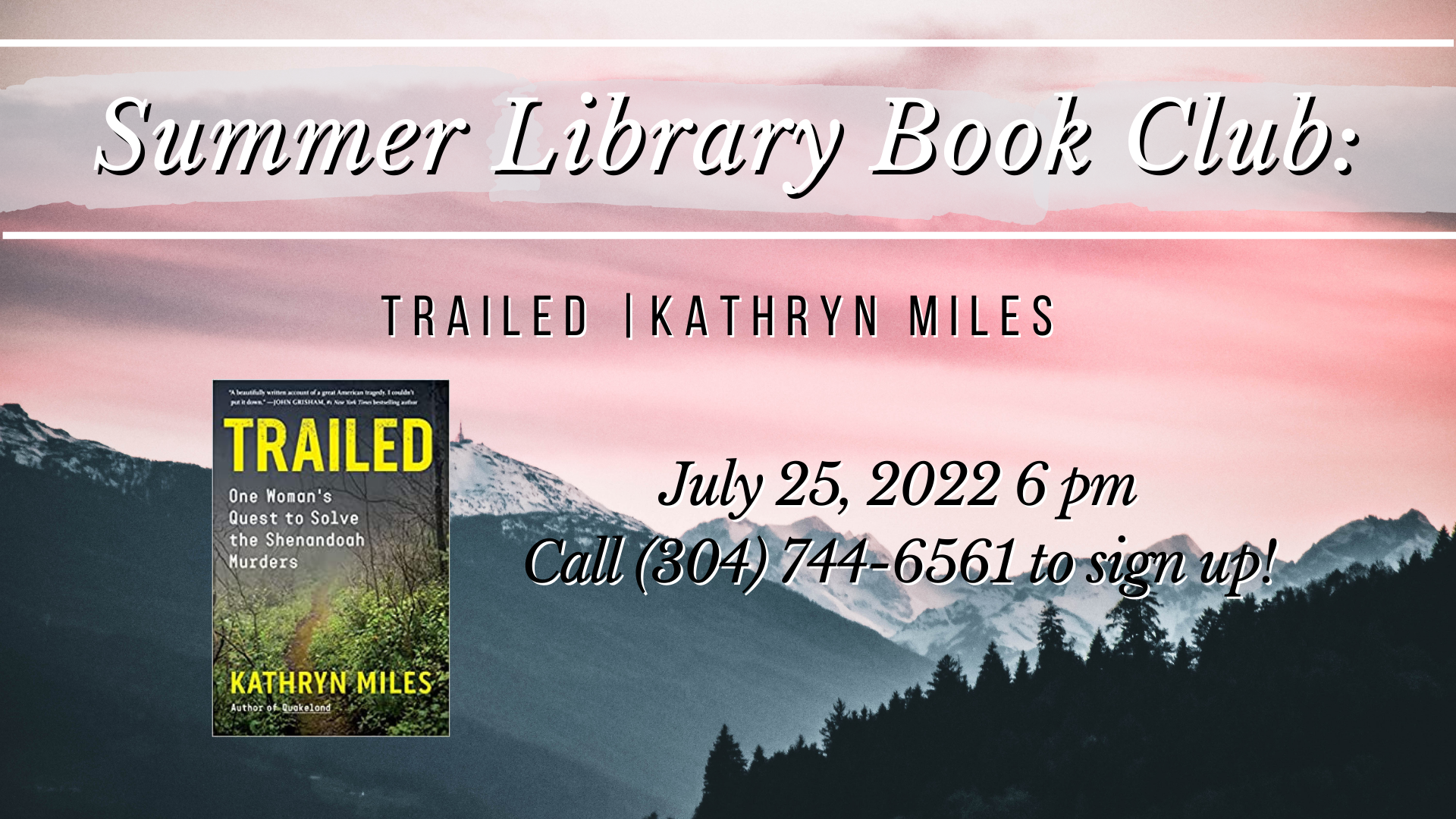 The Adult Summer Book Club's final book will be Trailed by Kathryn Miles! Join us for a discussion of this true crime novel! Books are availible for free from the library while supplies last if you sign up to participate. Call (304) 744-6561 or visit us to sign up.

“​Trailed is a beautifully written account of a great American tragedy—the unsolved murders of an undetermined number of young women, all by the same serial killer, who got away. The truth is still buried. I couldn’t put it down.”
—John Grisham, #1 New York Times bestselling author

A riveting deep dive into the unsolved murder of two free-spirited young women in the wilderness, a journalist's obsession—and a new theory of who might have done it

In May 1996, Julie Williams and Lollie Winans were brutally murdered while backpacking in Virginia’s Shenandoah National Park, adjacent to the world-famous Appalachian Trail. The young women were skilled backcountry leaders and they had met—and fallen in love—the previous summer, while working at a world-renowned outdoor program for women. But despite an extensive joint investigation by the FBI, the Virginia police, and National Park Service experts, the case remained unsolved for years.

In early 2002 and in response to mounting political pressure, then-Attorney General John Ashcroft announced that he would be seeking the death penalty against Darrell David Rice—already in prison for assaulting another woman—in the first capital case tried under new, post-9/11 federal hate crime legislation. But two years later, the Department of Justice quietly suspended its case against Rice, and the investigation has since grown cold. Did prosecutors have the right person?

Journalist Kathryn Miles was a professor at Lollie Winans's wilderness college in Maine when the 2002 indictment was announced. On the 20th anniversary of the murder, she began looking into the lives of these adventurous women—whose loss continued to haunt all who had encountered them—along with the murder investigation and subsequent case against Rice. As she dives deeper into the case, winning the trust of the victims’ loved ones as well as investigators and gaining access to key documents, Miles becomes increasingly obsessed with the loss of the generous and free-spirited Lollie and Julie, who were just on the brink of adulthood, and at the same time she discovers evidence of cover-ups, incompetence, and crime-scene sloppiness that seemed part of a larger problem in America’s pursuit of justice in national parks. She also becomes convinced of Rice’s innocence, and zeroes in on a different likely suspect.

Trailed: One Woman’s Quest to Solve the Shenandoah Murders  is a riveting, eye-opening, and heartbreaking work, offering a braided narrative about two remarkable women who were murdered doing what they most loved, the forensics of this cold case, and the surprising pervasiveness and long shadows cast by violence against women in the backcountry.